The Demi Bra: Everything You Need to Know About This Style 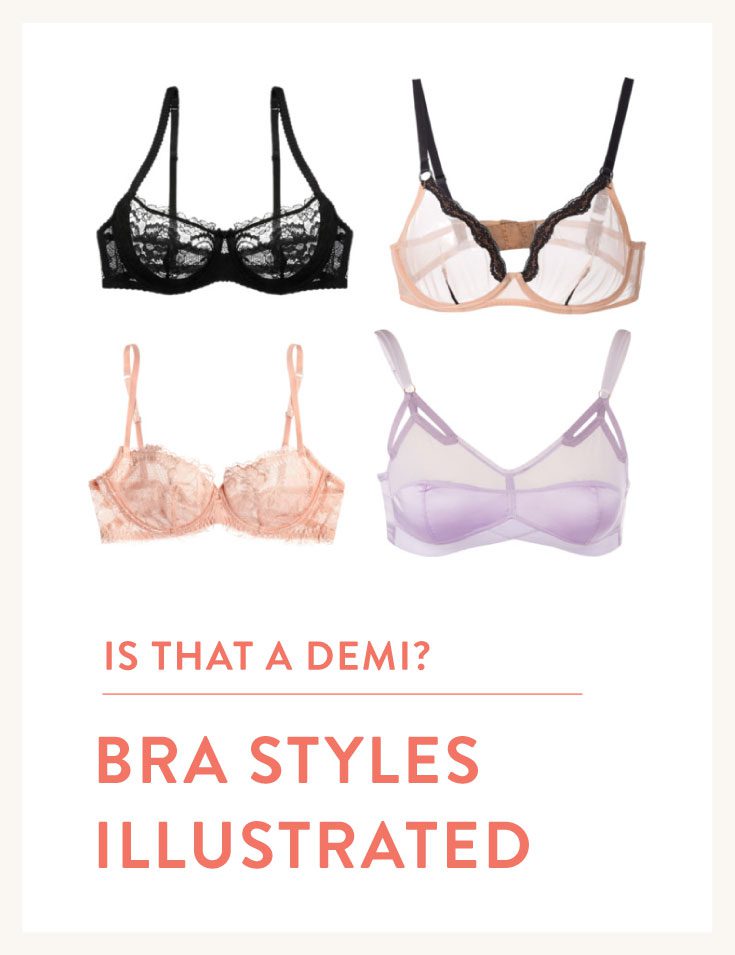 Let’s face it, bras can be overwhelming. We all know about the struggle when it comes to bra sizing. Between letters and numbers and confusing measurement formulas, many women have trouble finding the right fit. With so much confusion and frustration over bra sizing, many of us don’t even have time to think about bra styles and trust us there’s quite a few. There’s underwire or no underwire, bras with push up or padding, strapless, convertible straps, front-opening, bandeau, and the list goes on and on. One type of bra that you may or may not be familiar with already is the demi bra. This is a common style that you will see in most lingerie shops and is a popular and well-fitting option amongst women. Keep reading to find out everything you need to know about the demi bra.

What is a Demi Bra?

If you are familiar with the word demi, then you may know it means half. So taking that knowledge and applying to a bra lets us know that a demi bra will have less or half the amount of fabric of a standard bra. A standard bra will be more full coverage and have cups that cover the entire breast. A demi bra on the other band will have a half-cup which doesn’t cover the entirety of the breast. They have also been referred to as a shelf bra due to the tilting and lifting effects that the half cup gives. That tilt helps push the breasts up and center, creating amazing looking cleavage that doesn’t look fake like push up bras often can.

Why Choose a Demi Bra?

There are actually quite a few benefits that come from wearing a demi bra. The main reason women will reach for a demi bra over a standard bra is to hide it better under clothing. A full coverage bra works well for t-shirts or tops with a high neckline, but for many tops, you will want a bra that doesn’t peak out. A demi bra will go unseen under just about any style of top. You can wear them with V-necks, lower necklines and other types of shirts or dresses that show off a bit more skin.

A demi bra also tends to be more comfortable than a full coverage bra. They often have thinner or no underwire which is often the source of most women’s discomfort and frustration with their standard bras. This makes the demi bra a great choice for daily wear. They also come in padded or unpadded options if you want some extra push.

READ MORE:  Kuldeep talks about his preparation for SL tour

And finally, women love the demi bra for the look! As previously mentioned, the tilt of the cups helps to give your breasts an attractive and perky appearance. For this reason, the demi bra is a style that is very common in lingerie. Demi bras show just the right amount of cleavage and they do it in a way that will make your chest look enticing and sexy.

Is the Demi Bra Right for Me?

If the benefits that come with wearing a demi bra seem attractive to you, then a demi bra is most likely going to be a great option. A demi bra will work great for just about anyone, however some women may be uncomfortable with the lower level of coverage. If you are someone who prefers a more conservative look when it comes to undergarments, then you may want to try out a style that provides more coverage. Something like a bandeau, t-shirt, or sports bra will give you further coverage.

READ MORE:  Critical Expedition Roblox What is Roblox about?

If you are someone with large and heavy breasts, you may struggle with the demi bra. While it can still look great on those with larger chests, the lack of support may be discomforting. For larger chested ladies, it is important to find a bra that offers adequate support, so you are not straining your back. If you know you need better support than a half cup style can offer, try out a full support bra or even a racerback bra to help better distribute the weight of your chest.

If you are struggling with the fit of a demi bra as a fuller chested girl, don’t be afraid to go up a cup size or to try a style without padding. This can help prevent you from feeling like your breasts are spilling out of the half cup.

If you haven’t fallen in love with a bra yet then it’s time to try out the demi bra. There is a good reason that this style has been so popular throughout the years. If the enhancement that this bra will give to your chest isn’t a good enough reason to try it out, then the increased comfort levels and versatility should be!