The Hyper-Deflationary Digital Currency You Can Use Globally 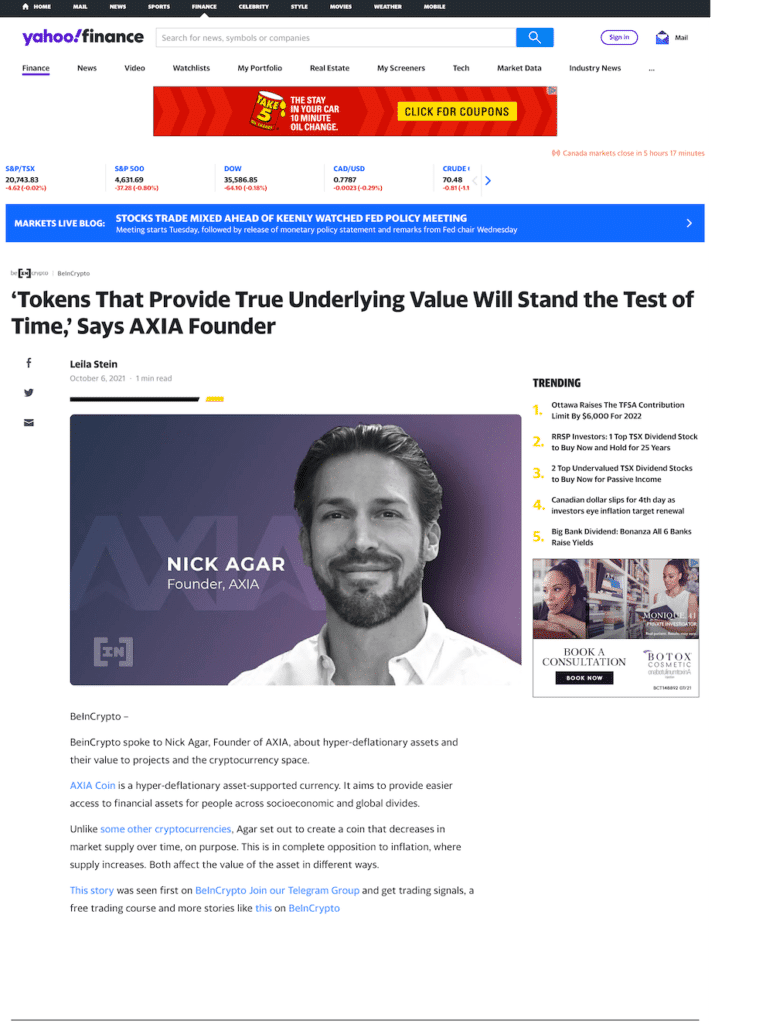 While digital currency might seem intimidating and difficult to use, AXIA is actively trying to change this narrative by developing a blockchain that is easy to access, robust and dependable. AXIA is the first hyper-deflationary blockchain digital currency and network.

What this means is that it has a total supply that is constantly being reduced through any form of participation or activity through coin burning. This actually helps to maintain the value of AXIA’s coin, while rewarding coin wonders for using their investments. This method of coin burning is nothing new, but it functions as one of the foundational aspects of the AXIA ecosystem. This ensures that coin holders will always be able to maintain the value of their coin or see it increase, but never decrease.

READ MORE:  Want to Learn how to Edit a PDF? Here are some easy ways

To understand why AXIA has hyper-deflationary currency, you have to understand coin burning. Coin burning is a method of helping to maintain the value of AXIA coin, despite its use or popularity. As AXIA Coins are acquired by individuals, a matched amount of AXIA Coins are “burned” in the network. This creates both scarcity and value, which helps to solidify the worth of AXIA across its global market

As more AXIA Coins are burned, the value of each Coin increases. This phenomenon occurs because of basic supply and demand; the rarer something is, the more value it has as long as it is still usable. Coin burning in the AXIA Ecosystem is accomplished by monitoring all forms of activity in the blockchain network.

READ MORE:  Why use a VPN: The advantages and benefits you should know about

AXIA Coins are burned whenever participants in the AXIA Ecosystem buy coins or make a purchase using AXIA Coins or any kind of transaction. This encourages participation in the ecosystem and currency of AXIA because it drives up the value of AXIA. This growing scarcity, therefore, leads to a continual and substantial increase in the value of AXIA Coins.

As time progresses, AXIA Coins become more valuable to its stakeholders which is something that AXIA capitalizes on with a robust ecosystem of useful tools. The more people use AXIA, the greater its borders expand and the more valuable it becomes, creating a true win-win situation.

READ MORE:  Can You Get Better At Blackjack

While some other forms of digital currencies also utilize coin-burning techniques to increase value, AXIA is unique in that the total amount of AXIA Coins will only ever decrease. The USD, as well as other currencies, are inflationary by nature, so the amount of USD increases as time goes on. This decreases the value of the USD over time. Other digital currencies have an unlimited supply of currency or no real-life utility. In contrast, there is a finite amount of AXIA Coin and high utility, making it one of the most useful and valuable forms of digital currency today.

Will AXIA Run Out of Coins?

One common concern when it comes to the hyper-deflationary nature of currency is that one day all AXIA Coins might be burned. The good news is this is impossible because when coin burning is triggered by something such as a purchase, using AXIA Coins, or taking out AXIA Coins from a staking pool, an equivalent amount of AXIA Coins are burned. The AXIA Coins that remain in one’s account are not burned.

Because of the supply-and-demand principles mentioned earlier, the value of AXIA Coin increases every time AXIA Coins are burned, heightening the worth of the AXIA Coins in each individual account. Therefore, AXIA Coins will never be burned until no more exist.

AXIA is a Transparent and Secure Digital Currency

AXIA is one of the most transparent digital currency projects in the industry. The AXIA Real-Time Reporting Platform makes it possible for the holdings within the AXIA Treasury to be transparent and visible constantly.

Although AXIA is a completely digital currency, AXIA has remarkable utility in the real world. It is available to anyone across the planet as long as they have access to the internet. The high accessibility of AXIA makes it a fierce competitor for digital currencies aimed at reaching those with limited access to and understanding of blockchain digital currency networks.

AXIA debit cards are available, and they can be used for online purchases as well as in-store purchases. AXIA Coins can be sent to anyone worldwide via the AXIA Wallet, which is a program that is included in all AXIA applications. Participants in the AXIA network can easily trade their assets for AXIA Coins using the AXIA Capital Bank. Other applications that are part of the AXIA Ecosystem include:

AXIA plans on putting efforts towards designing more services that will be exclusive to AXIA users.

Coin burning, transparency, security, and real-world utility represent several of the reasons why users are investing in AXIA Coins. AXIA aims to be the most inclusive, valuable, and decentralized blockchain on the market, and thanks to its hyper-deflationary digital currency, it is well on its way to becoming just that.