Top Women to Watch in the Robotics Industry 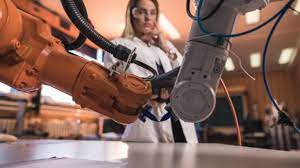 The Robotics industry is taking leaps and bounds in transforming how society functions for the better. Robotics is the inevitable future of our lives, and entrepreneurs are hooking on to these opportunities as we speak. What is captivating is a woman-led perspective on the development of companies based on robotics.

Here are a few women who have taken over the robotics world with added oomph and unwavering commitment:

The CEO of Destiny Robotics, Megi Kavtardze, has refined and re-defined the boundaries of robotics. She breathed life into the traditional narrow AI skillset of robots that could only get so much done. Her magnificent inspiration materialized during the pandemic when she felt minimal human contact and social interaction.

Megi wanted to solve the problem of loneliness through her vision of building a human-like robot home assistant. This is how Destiny was born. She is a neo-human robot who is a unique combination of AI, engineering, art, and design.

With Destiny Robotics, Megi has re-aligned the forces of AI and taken robotics application to a whole new dimension. She her team developed AI driven applications which is the huge breakthrough in robotics and general artificial intelligence developments.

Having built the “world’s first family robot” at Jibo, Cynthia Breazeal has set new records for the future of robotics.

As the Chief Scientist and founder at Jibo, Cynthia has always envisioned personalized robots that have intricate interactions with individuals to help them grow and reach their goals. Her robots can recognize which family member they are speaking to and have conversations accordingly.

LittleBits Electronics is run by Ayah Bdeir, who proposes an interesting angle to robotics.

Ayah Bdeir invests her time in teaching individuals how to assemble and build their own robots. A boon to budding companies that need a lot of prototyping for their products, LittleBits Electronics provides pre-assembled parts with magnets that snap together when attached.

As the CTO and co-founder of Hease Robotics, Jade Le Maitre envisions a public life where advanced robots can solve everyday and essential problems that individuals face, putting a stop to the ‘holding things until tomorrow’ attitude individuals have.

Despite having no prior experience in robotics, Karen Dolva is the founder of No Isolation and the brains behind AV1.

AV1 is a smart small robot that connects sick children to their classroom lessons and peers through an online medium.

Having found GLOBHE (a drone-service company) in 2015, Helena Samsioe debunked the traditional concept of men dominating the robotics world.

Not only is she referred to as “The Drone Queen,” but her company is launching the world’s first AI drone delivery service in the US for a humanitarian cause.

Devi Parikh’s research has laudable potential to aid the life of individuals with visual impairments.

According to her, this is a pro-social move that focuses on teaching children the importance of non-verbal communication, something which is left out of the curriculum in educational institutes.

Ecem Tuğlan is a revolutionary figure and the co-founder of Fenom Robotics, as well as the founder of Revolution 4.0.

Through Fenom Robotics, she created the World’s First Hologram Displaying Robot, and through Revolution 4.0, the world’s first digital and printable clothing label.

A professor, Wendy Moyle’s research on social robots and assistive technologies with prevalent diseases is world-renowned.

Her research focuses on the areas of aging and mental health, where she is trying to find a possible cure for neurocognitive diseases like Alzheimer’s and dementia.

Women in robotics are turning tables as they are achieving exemplary milestones in bettering human life and alleviating the status of women the world over as they continue leading their sky-rocketing businesses.